Mei Eden (“Waters of Eden”) is a very popular brand of mineral water in Israel and you can visit the Salukia Spring which is the initial source of the bottled mineral water. The park which encompasses Salukia is called Eden Spring (or Eden Springs). This is a great spot, easy and accessible, running water, flowers, space for children to run and splash. Marvelous.

Mei Eden brand and company were established in 1980 after the development of the Salukia wellspring in Katzin, Golan Heights. Eden Spring is known as “Einot Salukia,” which is named after an ancient settlement that existed during the Second Temple period. Very likely, there was a similar ancient Jewish settlement named Gamla, which also prepared for defense during the period where they revolted against the Roman rule. The name “Salukia” is probably named after the Seleucid Empire that was established in 312 B.C., and ruled over many lands in the Middle East for hundreds of years.

Nowadays, most of the spring water are pumped by the company, but some of it flows to the park, located on the south of the springs.

Nobody really minds that you can’t actually see the mineral water spring in the sense of a gurgling gush of water. It is hidden from view underground and it is a bit of a disappointment just to see some rocks with a black pipe. But the rest of the site more than makes up for it.

This lovely park is shaded by lots of eucalyptus trees and other local river vegetation such as common reed, raspberry bushes, Nerium oleander, and willow trees. The spring is still abundant, clean, clear, and cool. The park also has lovely pools where the water flows and easy walking paths by the spring. You can also find information and guide about the animals in the habitat. 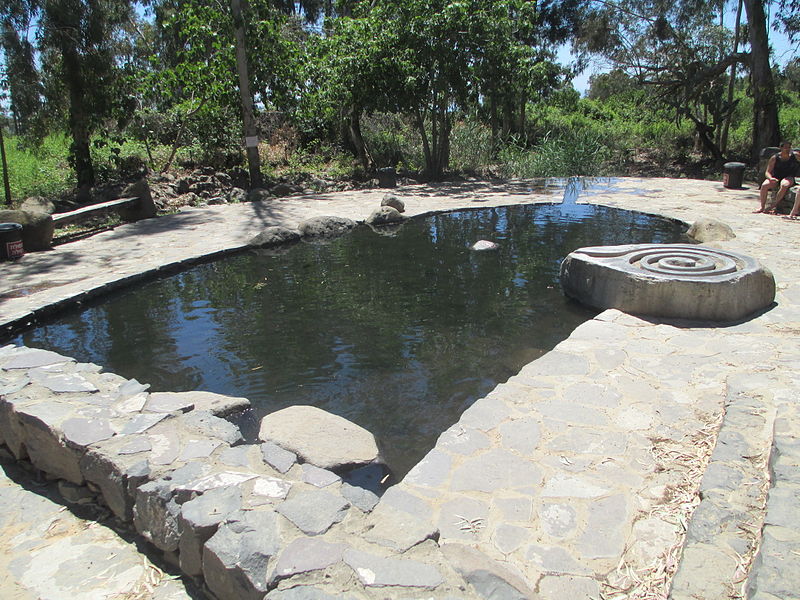 Overall, it is a great place to spend an hour or two, especially with younger children. The first part of the Eden Spring is wheelchair accessible (as far as the first pools.)

Eden Springs are located near the Hativa Sheva (7th Armoured Brigade) memorial. Also worth spending some time with children – they can clamber over some tanks. This brigade is legendary for its historic defense of the Golan (and therefore, all of northern Israel) in the initial days of the 1973 war.

There’s no entrance fee. There are also no facilities available on the site, so eating, drinking, and staying overnight are strictly prohibited (the park is closed during the evening). However, opposite the springs are plentiful spots for day picnics in a lovely forest.