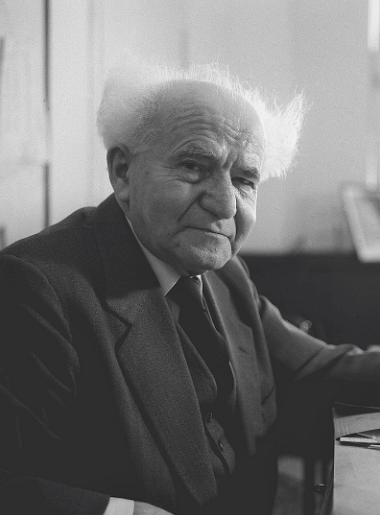 A lifelong advocate of Zionism, he became a prominent Zionist leader and served as the executive head of the World Zionist Organization (1946). Ben-Gurion delivered Israel’s Declaration of Independence on May 14, 1948.

Ben-Gurion’s charismatic personality earned the adoration of the masses. Following his retirement from politics, he was affectionately regarded as the “Father of the Nation.”

David Ben-Gurion was born David Grün in Płońsk, Poland (then Congress Poland as part of the Russian Empire), on October 16, 1886. His father, Avigdor (Victor), founded a Zionist group Beni Zion (Children of Zion), a movement meant to disseminate information among the oppressed and marginalized Jews in Eastern Europe the idea of their return to their homeland – the Land of Israel.

Young David was educated at a Hebrew school (heder) established by his father. At 18, he taught Hebrew at a school in Warsaw and joined the Zionist socialist party Paole Zion (“Workers of Zion”). He was fascinated by Zionism and was convinced that the first step for the Jews who wanted to restore Israel is to migrate to Palestine and settle there as farmers.

In the autumn of 1906, 20-year-old David Grün arrived in Palestine, through the help of his father’s funds. He found work as a laborer and farmer in the Jewish agricultural settlements in the coastal plains and the Galilee, the northern region of Palestine, for several years.

Due to his fluency in Hebrew, David got a new job as a staff member of Poale Zion-run periodical Ha’andut (The Unity). The new job ended his career as a farmer. He contributed several articles to the newspaper under various pen names. In the end, he settled for “Ben Gurion.” The adopting of Hebrew names (Hebraization) was common among European Jew immigrants in Palestine.

Ben-Gurion suffered hunger and sickness, as did his fellow Jewish pioneers. Despite that, he never let go of his goal. It was owing to his efforts that the 1907 Poale Zion convention included this declaration in its platform: “The party aspires to the political independence of the Jewish people in this land.”

In 1912 Ben-Gurion studied law together with Yitzhak Ben-Zvi (future second president of Israel) at the Istanbul University in Constantinople, Turkey. Following the outbreak of World War I, the Turkish authorities in Palestine, aroused by suspicion towards his Zionist activity, expelled Ben-Gurion and Ben-Zvi. Ben-Gurion made his way to New York, U.S.A., where he met the Russian-born Paula Munwels in 1915. They married in 1917.

His speeches around America boosted his political standing in the Jewish diaspora and allowed him to meet influential Jewish American leaders.

The Balfour Declaration, a British government’s statement published in November 1917, promised the Jews a “national home” in Palestine. In May 1918, he enlisted in the Jewish Legion created for the British Army by Zionist leader Ze’ev Jabotinsky. He sailed back to the Middle East to join the war to liberate Palestine from Ottoman rule.

Mandatory Palestine and the establishment of the State of Israel

When the British received the mandate over Palestine, the road to realizing the “national home” for the Jews had begun. For Ben-Gurion, it was only a few steps away from achieving political independence. In order to implement it, he called for mass immigration of Jews to Palestine to build a Jewish nucleus necessary for the foundation of the Jewish state.

That “nucleus” became the Histadrut, a trade union established in Haifa in 1920 to look out for the interests and welfare of the Jewish workers. Ben-Gurion’s contribution to the Histadrut proved to be a dominating and lasting influence. He also acted as Histadrut’s representative in the World Zionist Organization and the Jewish Agency. In 1935, Ben-Gurion was elected chairman of both organizations.

As the Jewish roots began to take a stronger and deeper hold in Palestine, anxiety was aroused among the Palestinian Arabs, which resulted in clashes between these two communities. In 1939 the British issued the “White Paper” policy, which adopted a more sympathetic attitude towards the Palestinian Arabs, leading to stricter immigration and settlement laws for the Jews.

In response to that policy, Ben-Gurion incited Jews to rise against the British, thus declaring the period of “fighting Zionism.” In May 1942, he called for an emergency conference of American Zionists in New York City. The convention decided on the establishment of a Jewish commonwealth in Palestine after World War II.

Following World War II, Ben-Gurion once again led the Jewish community to its successful struggle against the British Mandate. On the last day of the Mandate, May 14, 1948, Ben-Gurion declared the independence of the State of Israel. In this declaration of independence, Ben-Gurion stated that the newly established nation would “uphold the full social and political equality of all its citizens, without distinction of race, creed, or sex.”

On May 15, a day after Israel declared independence, the first Arab-Israeli War broke out. The following day, Ben-Gurion was elected as Israel’s first Prime Minister and Minister of Defense. He brought together various Jewish militias (that had fought against the British) and united them into one army, the Israel Defense Forces (IDF) — now one of the most formidable militaries in the world.

Despite Israel’s victory in the war, Arab leaders still refused to enter peace negotiations with the newly formed Jewish state.

In Prime Minister Ben-Gurion’s view, the creation of the state Israel is a direct continuation of the Jewish history that was interrupted 2,000 years earlier when the Romans crushed Hebrew freedom and drove the Jews out of Palestine. Those 2,000 years were a long interval in the history of the Land of Israel. Now that the State of Israel was established, they had returned to their rightful home.

To develop and strengthen the young state, Ben-Gurion presented Israelis with a series of challenges: the absorption of immigrants from around the world; assimilation of newcomers to diverse backgrounds and communities; the establishment of a unified public education system; and settlements in the desert regions. Ben-Gurion oversaw several establishments of the state’s institutions and presided over various national projects focused on Israel’s rapid development and population growth.

In 1953, Ben-Gurion withdrew from the government and retired to Kibbutz Sde Boker in the Negev desert. Two years later, he returned to politics, assuming again the post of Defense Minister and then being re-elected as Prime Minister.

Continuing as Prime Minister, Ben-Gurion sought to establish relations with West Germany despite bitter opposition. Under his orders, Israeli forces took over the Sinai Peninsula in 1956. But under pressure from the U.S., Israel subsequently withdrew from Sinai after being assured of free Israeli navigation in the Strait of Tiran and the “de facto” peace in the Israeli-Egyptian border, supervised by the United Nations peacekeeping force.

Ben-Gurion resigned as Prime Minister and Defense Minister in June 1963, with Levi Eshkol as his successor. Despite his resignation, he remained politically active, and a year later, a rivalry formed between Ben-Gurion and Eshkol. In June 1965, Ben-Gurion split with Mapai and formed a new party, Rafi; Mapai, on the other hand, merged with Ahdut HaAvoda to create the Alignment party, with Eshkol as head. In 1968, Rafi rejoined Mapai and Ahdut HaAvoda to create the Israel Labor Party. Ben-Gurion established a new party, Hareshima HaMamlachtit, which won four Knesset seats in the 1969 elections.

In 1970, Ben-Gurion retired from politics and spent the remainder of his years at his home in Kibbutz Sde Boker. He died on December 1, 1973 in Ramat Gan and is buried beside his wife Paula in Midreshet Ben-Gurion in the Negev.