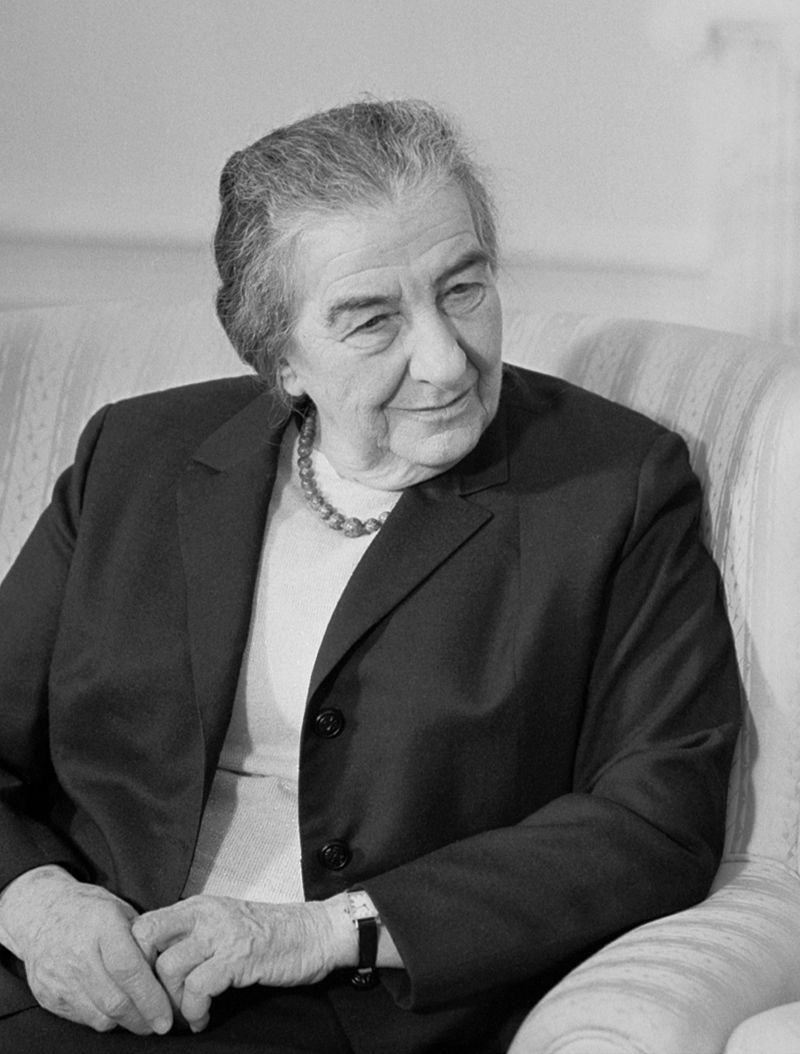 Golda Meir is known as the first and (so far) only woman prime minister of Israel. She was also one of the significant figures who helped establish the State of Israel in 1948.

But before she went to the top echelon of Israel’s politics, Golda Meir had had her own shares of struggles and tribulations. But she weathered them all with her exemplary leadership abilities that helped her steer to her country’s premiership.

Golda Meir was born Golda Mabovitch on May 3, 1898 in Kyiv (Kiev), present-day Ukraine (Kyiv was under the Russian Empire at the time of her birth). In 1906, Golda Mabovitch’s family migrated to Milwaukee, Wisconsin, USA, where she received her education. She attended the Milwaukee State Normal School, now the University of Wisconsin-Milwaukee, in 1916 (and perhaps also 1917) and later became a Milwaukee Labor leader Zionist Party.

It was also in the US where Golda Mabovitch met her future husband, Morris Meyerson, a sign painter. They married on December 24, 1917. Together, they left the US and settled in the British Mandate of Palestine, where Meir joined the Merhavya kibbutz. The kibbutz, recognizing her leadership skills, chose her as its representative to the Histadrut (the General Federation of Labor).

In 1924, Mr. and Mrs. Meyerson left the kibbutz and lived in Tel Aviv for a time before settling in Jerusalem. They had two children. Although Meir and her husband eventually grew apart, they never considered the option of divorce (he died in 1951).

Upon Mrs. Meyerson’s return to the United States in 1934, she joined Histadrut’s Executive Committee, a position she maintained from 1934 until World War II. This appointment was particularly important as it groomed her for her future leadership in Israel.

In June 1946, when the British arrested and detained several activists, including Moshe Sharett, the acting chief of the Political Department of the Jewish Agency, Golda Meyerson temporarily replaced him and worked for the release of her comrades and several Jewish war refugees who committed violations in the British immigration rules by settling in Palestine. After Sharett was released from prison, he took up new diplomatic duties while Meyerson officially presided over his former position.

On May 10, 1948 a mere four days before the establishment of the State of Israel, Meyerson secretly traveled to Jordan in her attempt to persuade King Abdullah I from joining the invasion of Israel, a decision which had been agreed upon by other Arab states. The following 14th, Meyerson became one of the 24 signatories of Israel’s declaration of Independence.

A year later, Meyerson was elected to the Israeli parliament, the Knesset, and maintained her position in that body until 1974.

She was also Minister of Labor (under Prime Minister David Ben-Gurion) from 1949 to 1956. In this capacity, she promoted significant housing programs and the construction of roads. She also carried out welfare state policies and organized the integration of immigrants into the country’s workforce. As a result of her leadership in that department, hundreds and thousands of new roads, homes, schools, and hospitals were built. She was also instrumental in developing the National Insurance Act of 1954, which introduced the social security system in Israel.

Upon her appointment as Minister of Foreign Affairs in 1956, she shortened her last name from Meyerson to Meir, which means “illuminate” in Hebrew. In this position, Meir encouraged ties with the newly established African states so that Israel could gain further relations and alliances in the international community.

After Israel’s victory over Egypt, Jordan, and Syria in the Six-Day War in June 1967, Meir helped bring Mapai together with two dissenting parties, Rafi and Adhut HaAvoda, and merge them into Israel Labor Party.

As Prime Minister of Israel

Eshkol died of a sudden heart attack on February 26, 1969, and Meir was elected as his successor. She maintained the coalition government that had formed in June 1967.

Six months after taking office, she led the reconfigured Alignment, consisting of Labor and Mapam parties, into the general election in 1969. She also pressed for a peace settlement in the Middle East through diplomacy.

During her years as Prime Minister, Meir traveled widely and had meetings with several other heads of state, including US President Richard Nixon in 1969, Nicolae Ceausescu of Romania in 1972, and Pope Paul VI at the Vatican in 1973. Also in 1973, Meir’s administration served as host to the chancellor of West Germany, Willy Brandt.

Meir’s efforts in forging peace with the Arab states were put to a halt by the Yom Kippur war outbreak in October 1973, from which Israel narrowly won but suffered costly losses. Israel’s lack of preparedness for the war led to questions and criticism towards Meir’s government. The Arganat Commission, who was tasked to investigate the war, eventually cleared Meir of direct accountability.

A year after the Yom Kippur War, Meir resigned from her post as prime minister in 1974, with Yitzhak Rabin succeeding her. In 1975, she published her autobiography, My Life. Already suffering from ill health, Golda Meir died on December 8, 1978, at the age of 80. She is now interred on Mount Herzl in Jerusalem.