Almost all countries around the world follow the Gregorian calendar, and thus, celebrate the New Year every the first day of January.

However, there are many countries that celebrate the Western New Year and then observe their own New Year. It’s because they follow their own traditional and religious calendars that are different to the familiar Gregorian calendar. Examples are the Lunar New Year (or Chinese New Year), Islamic New Year and the Jewish New Year, among others.

Like many New Years, the Jewish New Year is a period of reflection, new beginnings and new hope. And of course – prayer, food, and a lot of noise and celebration. During this holiday, Jewish people in Israel and from all over the world would happily greet each other with, “Shanah tovah!” (Hebrew for “good year”). The Jews have a term for their own New Year: “Rosh Hashanah,” which literally means “the day of shouting or blasting.”

Rosh Hashanah is a two-day celebration that begins on the day of the Tishrei on the Jewish calendar, or every September on the Gregorian calendar. It also marks the first day of the ten Jewish High Holy Days (or Yamim Nora’im or “Days of Awe”), during which a person’s deeds are thought to be able to influence both God’s judgment and His plans for that person. These ten high holy days end in Yom Kippur, which is a time of atonement and considered the most solemn day of the year.

Needless to say, Rosh Hashanah is a very important holiday on the Jewish calendar. During this holiday, the Jews ask God for forgiveness for their wrongdoings in the past year. It’s also a reminder not to repeat these same mistakes in the coming year. In this way, Rosh Hashanah gives a chance for every Jew to become a better person to oneself and to others.

The Jews celebrate Rosh Hashanah during the fall season in the Northern Hemisphere in observance of the Jewish calendar, which is a lunisolar calendar. The holiday begins on the first day of Tishrei on the Jewish calendar (equivalent to September to October on the Gregorian calendar), the first month of the calendar’s civil year and seventh month of the religious year. So it means that the Jewish new year kicks off in the autumn, not in January.

Although Rosh Hashanah has been observed and celebrated for thousands of years, the origins are quite obscure. Jewish scripture establishes the month and the days of a festival that is similar to Rosh Hashanah, but doesn’t quite consider it as Rosh Hashanah. In Leviticus 23:24-25 of the Bible, God tells Moses that the Israelites should observe the first day of the seventh month as a day of rest and mark this day with the blast of horns.

That is why horns are a familiar sight during Rosh Hashanah. The horn is called shofar, which is traditionally made of a ram’s horn that’s cleaned out and hollowed. It is blown during synagogue services on Rosh Hashanah (and also the end of Yom Kippur), as well as every weekday morning in the Jewish month of Elul leading up to Rosh Hashanah. At some point, horn-blowing has become associated with this holiday.

The earliest recorded mention of Rosh Hashanah is found in a rabbinic text from the Mishnah, an ancient legal Jewish text. 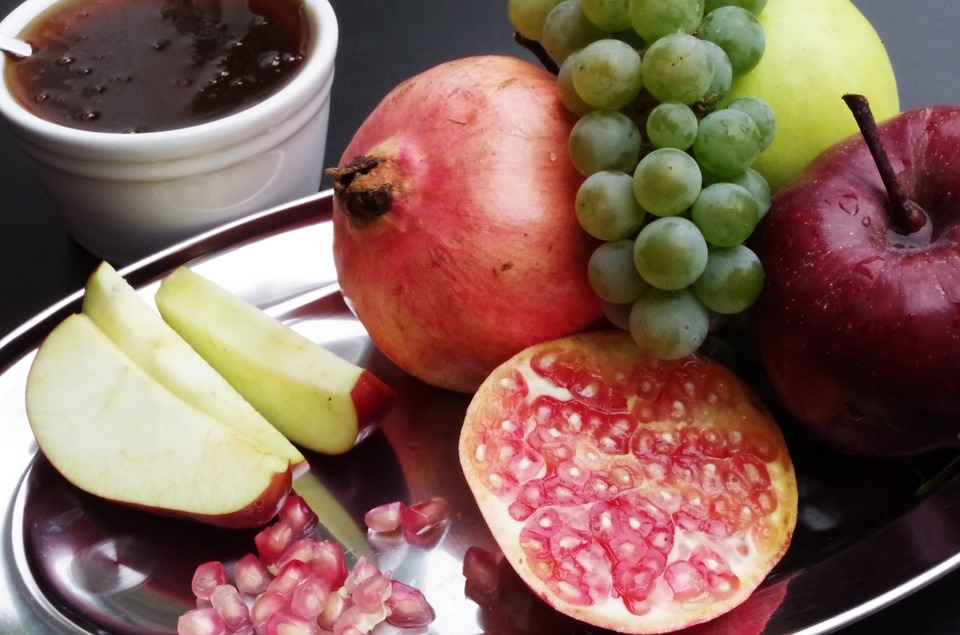 As Rosh Hashanah is a major Jewish holiday, work is prohibited. The Jewish people spend this holiday by attending special services at synagogues and celebrating with festive meals.

While blowing the shofar is part of a Biblical rule, it is also used as a symbolic “wake-up call” to all the Jews to mend their wrongful ways and repent.

Other Jewish sectors perform a ritual, called tashlikh, on the first day of Rosh Hashanah. This is where prayers are recited near a flowing body of water, such as a river or stream. After the service, the faithful throw pieces of bread in the water to symbolize the “casting off” of their sins they committed in the past year.

Typical of a new year celebration, food is an essential element on Rosh Hashanah. It’s like Seder in Pesach (or Passover) in a way because of the many symbolic foods served and eaten. Slices of apple dipped in honey symbolize a sweet new year ahead. Pomegranates are also a usual accompaniment to apples, as they symbolize being fruitful with their many seeds. Tradition also states that a pomegranate contains 613 seeds, with each of them representing one of the 613 Commandments that the Jews are supposed to keep.