The combination of stunning engineering feats and unparalleled eye for design results in some of the most picturesque bridges that you can find in Israel.

Some bridges are for pedestrians; others are for transportation; some are for stopping by and admiring nature; while others provide evidence of the country’s ancient past. There’s even one bridge that might help make your wishes come true! The following bridges are definitely a must-see, especially if you’re on an epic Israeli cross-country road trip. 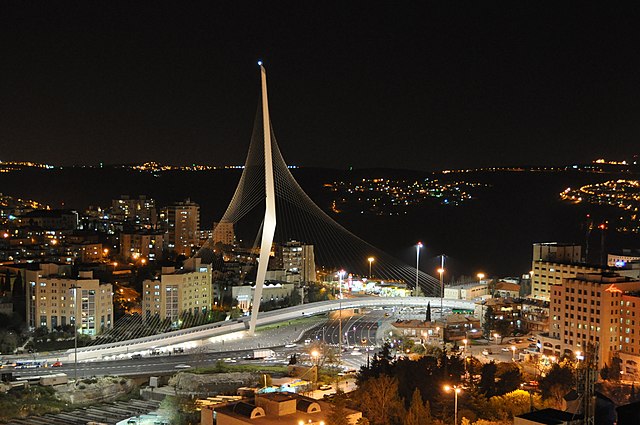 The Chords Bridge (also known as the Bridge of Strings or Jerusalem Light Rail Bridge) is one of the most-talked-about bridges in Israel. It has been lording over the city’s skyline since it opened in 2008.

The Chords Bridge is a side-spar (cantilever) cable-stayed bridge. Construction began in 2005 and finished in 2008. The project’s total cost was around NIS 129 million, exceeding the initial forecast budget of NIS 80 million.

It was designed by world-renowned architect and engineer Santiago Calatrava. The bridge, which accommodates the Jerusalem Light Rail’s Red Line, pedestrians, and cyclists, has elicited enthusiasm from some and loathing from others. The city’s inauguration for the bridge, which cost US$500,000, was also criticized as being too extravagant.

Calatrava has built the same structure in his other bridge projects in Argentina, the United Kingdom, Ireland, and his native country Spain. Before the Chords Bridge, Calatrava designed a similar bridge in Petah Tikva, which you will read below. The bridge, inaugurated in 2005, links the Rabin Medical Center, a shopping mall, and a municipal park. According to Calatrava himself, the function of the bridge was to serve nearby hospitals. He added that the bridge was built through private funding and was relatively modest compared to the other bridges he designed, including Jerusalem. Nevertheless, the Bridge of Strings looks aesthetically pleasing. And speaking of aesthetically pleasing bridges, the Beersheba Station Bridge probably takes the cake. It is unique as it features undulating arches that look like the shape of two eyes (or maybe a pair of DNA sections, depending on your perception). This 210-meter-long steel bridge connects the Beersheba North Railway Station, the Ben-Gurion University of the Negev, and the Gam-Yam Negev Advanced Technologies Park.

Built by Tel Aviv-based firms Bar Orian Architects and Rokach Ashkenazi Engineers, the wavy steel arches are twisted to form the shape of two eyes in the space between them. The Allenby Bridge, also known as “Gesher Allenby” in Hebrew, the Al-Karameh Bridge, or King Hussein Bridge, is a bridge over the Jordan River, linking the West Bank with Jordan. It is one of the best-known bridges in the country.

It was named after the British general Edmund Allenby, who initiated the construction of the bridge in 1918 over the site of an existing Ottoman-era structure.

The Allenby Bridge was destroyed, then rebuilt, and destroyed again before being rebuilt to its present structure.

The bridge has also made its way into the Israeli pop culture, as it is the locus of a 1971 song by Nurit Hirsh, “Gesher Bailey.” There’s nothing particularly aesthetic about this bridge, but it is still awesome, nevertheless. It is known as the lowest bridge in the world in terms of sea level.

Located on Highway 90 in the Dead Sea area, the Zohar Bridge stands 40 meters (131 feet) above the riverbed and has a maximum span of 52 meters.

For a lot of people, they get a thrill from swinging in the air above the treetops. If you want to experience the same, how about standing and crossing on a suspension bridge or hanging bridge? They can give you an exhilarating experience.

And Israel has two well-known hanging bridges – one is in Nesher Park in Haifa District (see the top public parks and nature attractions in Haifa), and the other is in Eshkol Park is in Northern Negev, Southern District.

The Nesher Park is located just outside the city of Haifa. The highlight of this park is easily its hanging bridge. Measuring 70 meters (230 feet) long and hovering over the Katria riverbed, this swaying bridge will reward anyone brave enough to cross it with breathtaking natural scenery.

If you can’t get enough of Nesher Park’s hanging bridge, there’s another one in Eshkol Park (pictured above) further down south of Israel. This 80-meter (262-foot) long bridge allows visitors to cross the Besor River to the opposite bank to marvel (and take photos of) at the magnificent panoramas of the area. 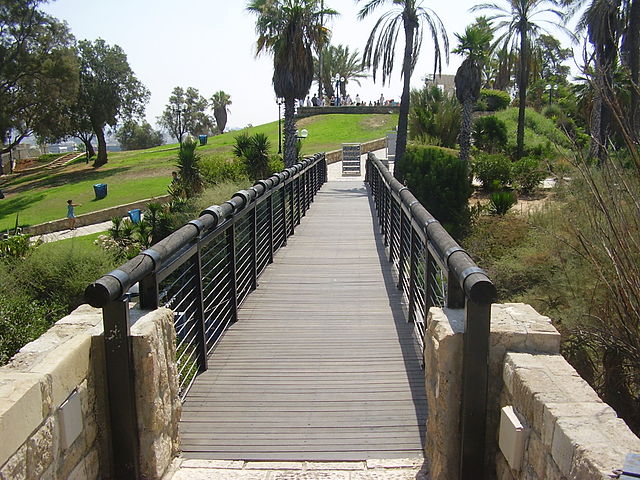 Visit the old city of Jaffa (a bit further away from Tel Aviv), where you can make your wish on a small but distinctive bridge there.

The 26-meter (85-feet) Wishing Bridge connects the Peak Park and the K’dumim Square. Although it’s not a long bridge, what makes it distinctive is the 12 bronze plaques on its rails that represent the 12 Western zodiac signs. It is said that if you stand on the bridge and touch your own sign while looking out at the Mediterranean Sea, your wishes will come true. There’s also a stone mosaic comprising the 12 zodiac signs at the bridge’s entrance. The Ad Halom Bridge is a historical landmark at the entrance to Ashdod, a city in Israel’s Southern District.

Ad Halom (“up to here”) was the northernmost point where the Egyptian army advanced in Operation Pleshet during the 1948 Arab-Israeli War.

This ancient bridge was first constructed over the Lakshish River during the Mamluk period in the 13th century. It was renovated at the end of the 19th century during the Ottoman period and destroyed during the 1948 war. After the war, the bridge was reconstructed. The bridge was formerly known as “Jisr Isdud” or Isdud Bridge.

Probably the most famous and photographed bridge in Israel, the Azrieli Center Bridge is a pedestrian bridge that links the business and shopping center to HaShalom Railway Station on one side, to the Defense Ministry on the other.

The Jisr el-Majami Bridge is an ancient stone bridge, probably of Roman origin, built over the Jordan River bordering Israel and Jordan.

The bridge is one of the relics of the Jezreel Valley Railway, which was in operation during the Ottoman and the British Mandate period.

At -257.7 meters (-845.4 feet) below sea level, the Jisr el-Majami Bridge is the world’s lowest commuter railway bridge. It was destroyed during the 1948 Arab-Israeli War to prevent the Arab Legion from crossing the Jordan. Since after 1948, the bridge has undergone restoration. Although it is no longer in active use as a railway bridge, it provides visitors a glimpse of its past.