This is a tour of Jerusalem that I have used successfully with many friends and business colleagues. It takes 2-3 hours and is best done in the early evening as it gets cooler as the evening stretches into night. However, if you are only around during the day, bring a hat, lots of water and it works just as well.

I have shown some options that will turn this into a much longer Jerusalem route and there are many more. Enjoy exploring!

Overall this essential Jerusalem tour is simplest by car (or taxis) but as it is all in town then with some planning it is also doable by bus.

Start off on the Tayelet; located in the Talpiyot area. This beautiful open park on the side of the mountain offers stunning views of the Old City, Mount Scopus/Mount of Olives and in the background the Judean Desert towards the Dead Sea. At the end of the Tayelet (and now off limits) is the former British High Commissioners residence and now a UN domain.

Legend has it that this is the place where Abraham spied the Temple Mount “from afar” and left his entourage as he set off with Isaac to almost sacrifice him (substituting a ram at the last minute) on the place that was to become Temple Mount (see Genesis ). Behind (approximately south) are the fields (some now developed) and the village of Kibbutz Ramot Rachel. The last Israeli enclave towards Bethlehem after the War of Independence. The promenade ridge also saw lots of action in the Six Day War (see the signs that mark the battles.) See The Tayelet

From here you have a clear view of the New City – spot the distinctive King David Hotel – Mount Zion (grey triangular roofed monastery) and the Old City Walls. You can easily see the Golden Domed Mosque on Temple Mount and trace the areas of the City of David and the valley system around the area. In the distance is the Mount Scopus Hebrew University Campus and Mount of Olives with the large cemetery (tradition has it that the resurrection will start from Jerusalem and those who are lucky enough to be buried on the Mount of Olives will be the closest.)

Hang out here and soak in the view and normally it is a happening place, for joggers, families and groups. See Relaxing on the Tayelet

From here it is back in the car for a short ride along Derech Hevron towards the Old City, passing the Mount Zion Hotel (opposite but not on Mount Zion). Between 1948 -1967 there was a small cable car arrangement (due to the complexities of the armistice lines and a small museum records the events.) If you have time then explore Mt Zion – David’s Tomb, Last Supper and great views.

The road heads down into the valley. At the bottom of the valley to the left is the Sultan’s Pool – now an open air concert arena and to the right the Gai-Ben-Hinom (or if you say it fast enough – Gehenom) Valley.

Follow the road up to the left – above you is Mount Zion and then the Old City walls. Take the first left (2nd traffic lights) and use one of the public car parks. From here it is into the Old City on foot through Jaffa Gate. The large hole in the wall is  just over 100 years old having been made to allow the Kaiser’s entourage to pass through on a state visit. (if you are not pushed for time and visiting by day) then you have the extra options of Tower of David (Citadel) or the Old City Ramparts tour.

Head down into the the souk and enjoy the sights, sounds and smells of the bazaar. A mix of tourist goods, spices and real market.

Bearing left (see a map) will allow you to visit the Church of the Holy Sepulchre (verify opening times before you visit). You can retrace your steps back to the main street – or take the other exit from the courtyard and bear right to rejoin the main passage. 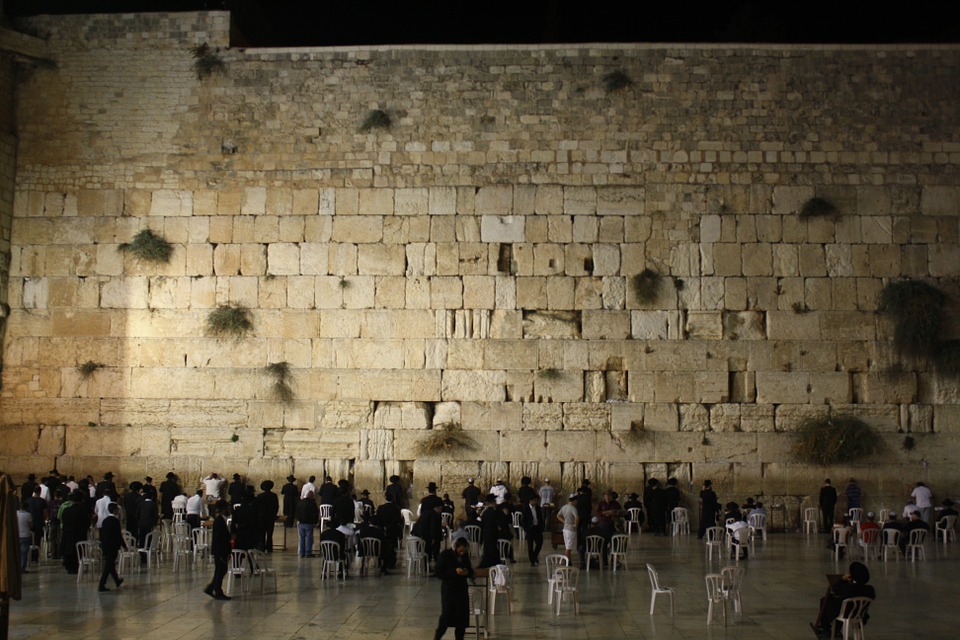 Enjoy the browsing but keep going down and follow the signs towards the Western Wall (after the really heavy souk/market starts to peter out.) The entrance is a narrower passage that winds down until you are confronted with the entrance booth and the stunning holy view. The Western Wall is all that remains of the Temple compound (destroyed by the Romans in 70 as they sacked Jerusalem.) It is actually part of the external walls. See The Kotel – Wailing/Western Wall

Men to the left, women to the right in the area closest to the Wall. Please respect the dress code and no photographing etc. on the Sabbath. It is a place to watch and to pour out ones heart – there is also a custom of petitioning G-d and writing a note that one places in the Wall.
There is the option of the Kotel Tunnels – to see more of the Wall but advance booking is generally required.

When you have offered your prayers and ready to move on – leave using the other set of steps (to the right of the ones that you came down on) towards the Jewish Quarter.  See also Don’t Miss in the Jewish Quarter

Browse at your leisure, and be sure to admire the outside of the newly rebuilt (dedicated in March 2010) Hurva Synagogue in the main square. The Hurva was one of the enduring symbols of the destruction between 1948 & 1967.

After the main square near Habad Street is the Cardo. This was the main North South street in ancient Jerusalem and has been excavated and restored. You can see how the ancient shops would have been. If you are lucky then often there are recreations with actors dressed in period costumes. In the underground precinct you will see a recreation of the Candelabra (Menorah) of the Temple. This has been built by a research group dedicated to studying and building the essential elements of Temple service and equipment.

From Habad Street take the thin metal steps on the right on to the roof-top walk. Here you can see where North-South crosses east-West and enjoy phenomenal views of the Old City and Mount Olives beyond.  See Roof Top Walk Probably one of the most rewarding views of Jerusalem.

Retrace your steps to the beginning of the Cardo and the take the steep street (Or HaHayim) to your right. Keep going as the Jewish Quarter stops and you reach the outskirts of the Armenian Quarter.  Turn right watch for the cars and make your way back to Jaffa Gate.

If you have time then the take a leisurely stroll through Mamilla. This is an area of (mostly high end) shops and coffee shops. For a fuller description  – great place to wander (even if you don’t actually like shopping) because it is a busy happening place, often with street performances and outdoor artwork. Feel free to stop for refreshments – although we are not quite done.

Assuming things have gone according to plan – your car is in one of the nearby car parks. Get back in and head down King David Street. The historic King David Hotel is on your left and  the YMCA complex on your right. At the traffic lights at the end of the street turn left towards the Windmill and park.

The windmill was build by Montefiore in the late 19th century as Jewish settlement spread outside the Old City to the new neighborhoods of Yemin Moshe and Mishkenot Shananim. It was supposed to supply work, but the legend says that it was built facing the wrong direction and never caught the wind! Nearby is Montefiore’s coach. Walk on to the Plaza and enjoy the view of the Old City. It is a great place to finish off as you can see where you started from on the right and the close up view of the Old City is a fitting finale.

If you have time wander through the passages of Yemin Moshe and Mishkenot Shananim and then head back to the car. Whether you are a devout Christian or not, you cannot leave Jerusalem without visiting another one of the four quarters of the Old City (the Jewish Quarter is mentioned earlier). The Christian Quarter runs north from the Jaffa Gate and is the home of the Church of the Holy Sepulchre, considered as Jerusalem’s holiest site and said to have been built on the site where Jesus was crucified. Among winding alleyways are some of the Old City’s most popular shops, bazaars and souks and churches of other Christian denominations that are well worth investigating, including a Greek Catholic and a Protestant Lutheran church. You can also find the Church of St. John the Baptist, Jerusalem’s oldest church.

The Muslim Quarter, another part of of the Old City quadrant, seems to be the most alive and bustling. When it comes to the best souk shopping in Jerusalem, you can find it here. The Muslim Quarter roughly runs from Damascus Gate through the northeast part of the Old City. The streets are lined with some of the finest surviving examples of Maluk architecture, which include the Khan al-Sultan where you can climb up the roof where you can enjoy the best views of the across the jumbled streets and alleyways. Don’t forget to check out St. Anne’s Church (along Antonia Street), which was built during the Crusader era and the Pool of Bethesda nearby.

A short drive (five minutes with no traffic) will put you on Emek Refaim (see Hanging Out in Emek Refaim) where you should park and pick a restaurant or cafe for dinner.

Of course there is plenty more to see and do – this could easily be a full day’s route adding other places as you go (for example Davidson Centre and clearly more time in Jerusalem‘s Old and New Cities) but experience has shown that this is the real essential overview tour.

(Variations include – visiting the windmill area between the Promenade and the Old City – definitely saves some doubling back – but I think not as rewarding. You can also choose to finish and eat dinner in Mamilla, rather than Emek Refaim.)